that night in budapest city… read what happened when i went to budapest to join the other shituationists.

i got of the train, and saw X standing on the plattform, waving a big sign with “motherf*cker” written on it. he is soo cute. the we went home and got drunk and so on and so on… next day the actions should get started.

we went to a bar, to listen to some drum’n’bass and got drunk. then we picked up a mobile sound system and brought it to tuzrakter, there was a party about to happen, electro cocktails. for the first part of the evening we played some house and techno beats there and chatted with the anarchists and got drunk.

then there was a balkan party in that house, that at some point got a surprise visit by a circus caravan, that played an energetic live set. the crowd went mad 🙂

then there was disco again, but suddenly everything got on fire, some circus artists were doing fire juggling in the massive… crazy. 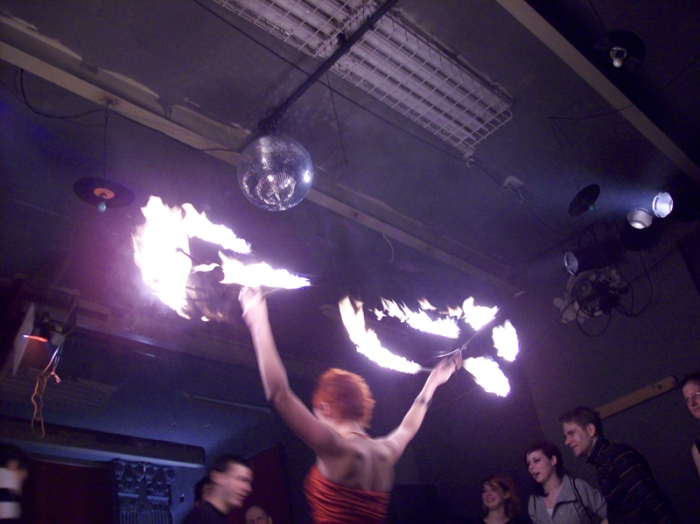 yea but then we had enough of our little anarcho-party and the balkan beats and moved on. a party mob was formed that went to a little cave below a cafe at the danube, where we danced to some raw minimal techno. for one hour or so. the chill-out was more or less a darkroom for some teens who didn’t care that the light was on. and you always stepped on them making out when you had to go to the restroom.

yea anyways, was nice, but we cruised on to the “trafo”, for some electro-shit. very colourfull visuals, skinny teens in berlin-style clothes and the bar people were creating more dirt than the crowd. ciggies and stuff everywhere :). then the bastards turned the light on and we went to an afterhour (our mob had shrunken to 2 by now). afterhour was pretty nice, there is this A38 ship in the danube that hosts some hard techno/electro/house stuff. and at some point when we thought: tough, this is the end of this party tour, we went in the nice machine room for some light and light dancing with the local drag queens. enchanté! then home to regenerate for the coming days.

One thought on “that night in budapest city 1”