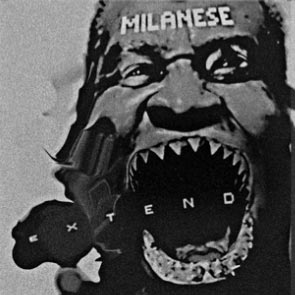 Back in stock. A brawling soundclash that threatens to scorch off your eyebrows, the debut LP from Milanese takes the schematic he ironed out for Warp a bit ago and sparks it through the dubstep bedrock – resulting in the noir electronics of ‘Extend’. Scrunching handfuls of jungle, grime, dancehall, electro and dubstep into the fizzing whole, ‘Extend’ is an album all about the friction caused when rough aural surfaces connect; kicking off with the depth-charge sonics of ‘Mr. Bad News’ and closing 40 minutes later on the majestic malice of ‘Tony Sombrero’. Including the serrated coalition with Virus Syndicate that burnt some stylus a few weeks back, other notable tracts include the juxtaposed silky vocals / gnarled beats of ‘Caramel Cognac’ (reworked from the killer 7″ version released by Various Production), the digitally disrupted bluster of ‘Barry’, whilst ‘Boss Eye’ flirts with Alec Empire territory through a crumbled edifice of bleached digital mayhem. Able to alternate between moments of high drama and throw away excess without a jarring transition, ‘Extend’ sees Milanese offering up a vision that is from the darkest family-tree, but nonetheless exists in a world of its own.

Extend by Milanese is one of the most gorgeous releases I found the last months .. Find it and enjoy