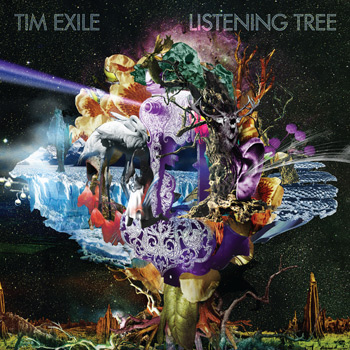 ‘Listening Tree’ is Tim Exile’s 3rd album & was out on Warp/Planet mu in 2009. It‘s been characterized from ‘groundbreaking’ to ‘the worst album Warp has ever released’.

Being used to Tim Exile’s previous releases I was expecting some kind of gabbed out IDM, but to my surprise the 1st time I gave it a listen I was left kind of baffled & thought :‘That’s so cheesy!’  Since I’ve always appreciated Exile’s works & numerous times have enjoyed his improvisational live sets, I gave it another chance & kept on playing it until I realized how daring & original it was! It might have been 2 years since this album’s release but it still has the ability to make my day & it’s definitely more than cheesy (plus a bit of ‘cheese’ never hurt anyone..!)

‘Family Galaxy’ has got to be one of my favorite tracks out of the album. Its dreamlike contagious lyrics (Keep changing every day don’t stay the same or you’ll be a fool! The family galaxy keeps changing every day no matter what you do..) keep building up in a melodic swirl of synths that leave you with an euphoric feeling.

Overall ‘Listening Tree’ is an album that deserves your attention & it surely stands out in an often musically dull environment.