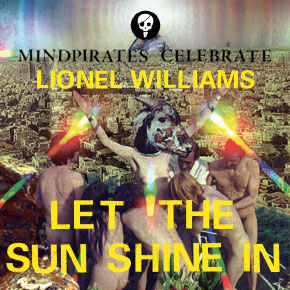 a press release sent at our email by the organizers. Even if we are a bit late (we apologises)Im posting bellow the whole press release and reviews as well as the upcoming sessions

Berlin, January. Cold … wet … dark … isolation. And a whole lot of nothing going on. One either grins and bears the temporary depression or packs up a melancholic soul and escapes. The long-looming year 2012 has already become our current calendar. The countdown is on. Where do we go next? What will happen? Will the world end? Will it go irreparably mad? All the omens! Will Capitalism fall? Will Berlin stay Berlin? Will we ever see blue sky again?

Flash back to last autumn: Sunny California. LA. A screening of the Mindpirates film, Problema at USC’s School of Cinematic Arts. The Mindpirates and artist Lionel Williams met for the first time. They talked and talked for hours in a parking lot behind the cinema. Before they knew it, they were jamming in a tiny wooden house. 6 by 6 feet. Lionel’s daily recording studio. They got lost, thrown into the music, tripping through a universe of sound. They fell in love, making plans for things to come. They parted, vowing to meet and jam again, next time in Berlin.

Lionel William’s art, his bright, imaginative world of colors, forms and mystical sensationalism is an exploration into the ancient wisdom and sacred locations of Egyptian priests, Sufi mystics, Indian philosophers, Mexican healers, Asian Buddhists, occultists and many more of the planet’s religious and visionary peoples.

His music is an attempt at creating “sonic matrices,” which are combinations of sounds that beneficially affect the body. The effects are released at the points where frequencies intersect, where certain tones, chords, and patterns come together to tap into the human psyche.

The Mindpirates will celebrate with Lionel Williams, a hippie sun child from California, during the greyest of days of Berlin winter 2012. He is invited to share his stunning artwork — collages on paper and film — and to come together with a musical community for a seven-night series of one-off jam sessions. For each of these seven nights a great pool of musicians and artists has been invited, like Raz Ohara and the Odd Orchestra, Jochen Arbeit (Einstürzende Neubauten), Verity Susman (Electrelane), Manfred Kage, Jens Zygar, Valerie Renay (Noblesse Oblige), Travis Stewart aka Machinedrum, Miguel De Pedro aka Kid 606, Infinite Livez, Sergei, Anika (Annika Henderson), Hopek Quirin, Sneak-Thief and more.

During the course of the week, all the musicians will join and jam with Lionel Williams and the Mindpirates, leading a trip into the undefined beautiful nowhere.

Let The Sun Shine In — The Berlin Sessions will happen from 22 – 28 January 2012 at Mindpirates based at the Oberbaumbrücke in Berlin, Kreuzberg. Here, the Mindpirates are ready to debut their newest endeavor: the Mindpirates Projektraum and Mindpirates Auditorium. After two years of running the Mindpirates Vereinsheim, where they’ve held many events — film screenings, exhibitions, concerts, performances and celebrations — the Mindpirates are thrilled and delighted to share this new space and all its future moments with you.

CALENDAR OF THE BERLIN SESSIONS:

“Let The Sun Shine In”, the exhibition will be on view from January 22 until February 18, 2012 in the Mindpirates Projektraum.
Opening hours: Tuesday – Saturday, from 1pm – 7pm
The publication Let The Sun Shine In (color, 64 pages) has been created especially for this project.