Hasenheide is one of the several big parks of Berlin, rather famous for many self-organized techno openairs the last years in Neukolln. 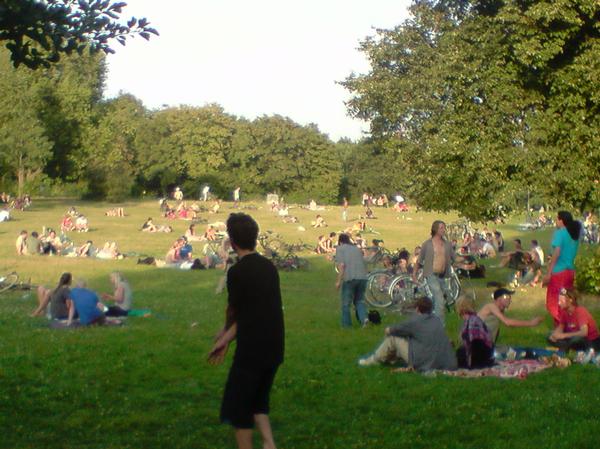 Unfortunately the last attempts of various persons to organize an open air in Hasenheide in our days was failed. Police doesn’t really tolerate those small doses  of non commercialized  happiness and free party culture in general.It is increasingly a hard mission to organize a party outside of the existing club infrastructure. This is probably happening because Berlin radically became a different city within the past years, especially concerning Neukoln, the things developed according weird facts and standards. I don’t blame all of those foreigners who recently moved in the area indeed. I don’t agree with those who call the crowd of Neukolln just hipsters or trash artists either. Neukolln is definitely one of the hot spots of Berlin at the moment with a multicultural background such as other famous districts and areas of several international metropolis of the world, look at New York, London even Tokyo. But in the other hand with certainty as it happened in all of these places, the prices and the daily life became unaffordable.

Perhaps the techno openair scene of Hasenheide is over as I explained already, but in the heart of Neukolln, this new generation is developing a new kind of community events. Yesterday(Tuesday) together with the summer also arrived the open air events. We were laying down after a photo shooting in Hasenheide and suddenly we realized that hundreds of people were going somewhere. In the beginning I though that a birthday party was taking place somewhere in the park until some friends informed us that a mobile kino  was screening the 1970′s Woodstock documentary. You definitely know this classic almost 4 hours documentary.

When we waked a bit more inside the park, at exactly the same place where the techno mobile soundsystems and openair parties were taking place in the past, we saw something very spectacular. Approximately up to 250 people were sitting on the grass in front of the huge screen. The majority of the people were speaking euro-English in their private conversations, not so many really seemed to pay attention at this classic hippy documentary. Was it probably just a motive to get in the park and remain in the social life after the weekend?. Probably yes.

Nevertheless the dudes who organize the mobile Kino have a facebook page in case you would like to get some info regarding their future events. They actually deserve a bit of your consideration because they bring a bit of social activities back to Hasenheide(I m not informed for other kind of events in the park, If you do please let us know). Therefore I would like to share with you my positive comment with the hope that they will keep doing the open mobile kino there or other parks of Berlin.