In April 1941, Nazi Germany started its military assault against Greece, coming to the aid of fellow Axis power Italy, who had unsuccessfully invaded the country in the previous year. Almost two years later, on 15 March 1943, the Nazis and their allies launched the first train transport at Thessaloniki Railway Station in order to commence with the large scale deportation of Greek Jews to the extermination camps of Auschwitz and Treblinka. Within only 17 months, by the time the Nazis were forced to retreat in the face of advancing Allied forces, more than 80% of Greece’s once thriving Jewish community had been murdered.

But the Nazis would not have been able to execute the industrially organized genocide of nearly 60.000 Jews in Greece without a functioning network of accomplices and the support of a large number of people within Greek society itself: Not only Greek national socialist organizations and the collaborationist government of the “Hellenic State” with its “Security Battalions” actively aided the German occupiers in the deportation of the Jewish population. There were also many who collaborated by denouncing their neighbours, colleagues and class mates to the Nazis, and those who sought to profit from expropriated Jewish property.

In commemoration of those who were murdered by the Nazis and their collaborators, we will hold an open event at Laidak on 15 March 2016. We will speak about the far-reaching role of anti-Semitism within Greek society and give a brief introduction to fascist organisations at the time, in order to shed a light on the conditions under which the Nazis and their accomplices pursued the »Final Solution« in Greece. We will also, however, speak about those who resisted the mass murder of the Greek Jews, such as the communist partisans and their efforts to invite Jews into joining the armed resistance. The main event of the evening will be a showing of Fofo Terzidou’s documentary film “By-standing and Standing-by” (2012), which tells the story of Thessaloniki’s ancient Jewish community and its destruction during the time of the German occupation.

*** The whole event will be held in English.

The Shoah of Europe’s most ancient Jewish community, that of Thessaloniki and the unknown story of rescue – only 60 km south of Thessaloniki – of the Katerini Jews, Greece’s smallest Jewish community at the time. Historic memory and its destruction, collective trauma and the construction of the official version of events as well as stereotypes and prejudices are issues dealt with by the documentary. In addition to personal testimonies, interviews with renowned historians as Steven B. Bowman, Kathryn E. Fleming, Rena Molho, Stratos Dordanas, Maria Kavala, Paris Papamichos-Chronakis. 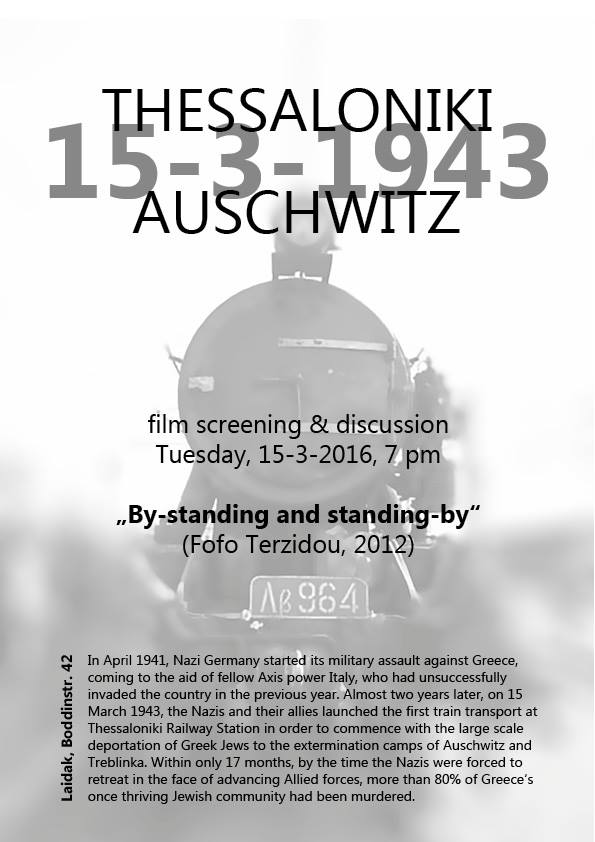