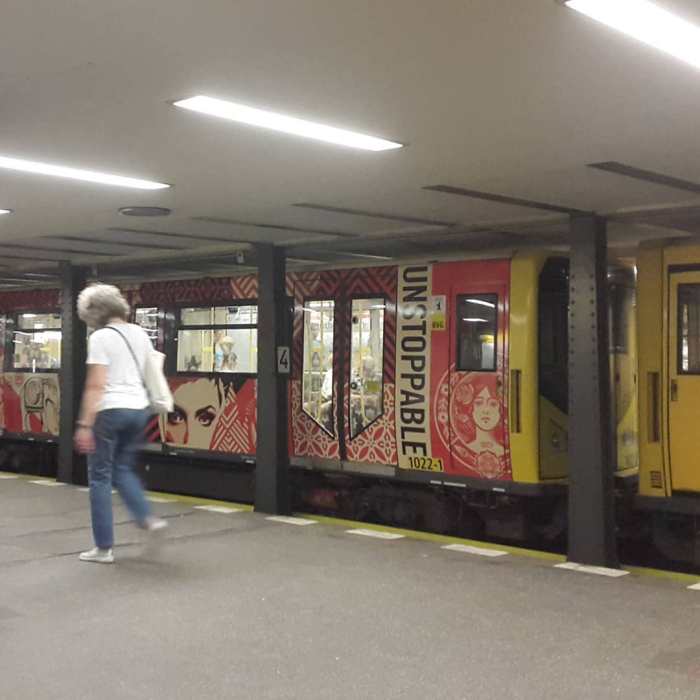 A commercial wholetrain, with an adhesive design of the urban artist Shepard ‘Obey’ Fairey, who recycles socialist movement graphics from the past for his succesful imagery.

“Unstoppable”: The powerful arrogance of urban art in alliance with money. This is an advertising for a semi-private museum about urban art in Berlin: Urban Nation. The museum is not a stately institution but heavily funded by federal tax money via the Gewobag (federaly owned housing of Berlin), another money giver was the Lotto Stiftung. This funding structure was cooked up in cooperation with the cultural secretary Tim Renner, who also brought Chris Dercon to Berlin who now crashed the Volksbühne theater and recently resigned.

What a powerful statement for 21st century Berlin: this is the kind of art that is wanted here, playful and ignorant mixing of historical aesthetics, peel-off muralism as a train advertising. Funded by tax money.

The shopping center around the corner had an urban art week now. And there was the mural festival last week, completely random kitsch pieces all over the city.

Each city gets the wholetrain it deserves?

I love the art scene of this city, completely and diametrically opposed to this “winner’s art” (Siegerkunst, Wolfgang Ullrich’s term). We have to promote and support even more strongly the real and exiting urban art of this city.